Oakham of the horse-shoes indulges in a golden jubilee.

Article in the Tablet 28th October 1933. Oakham of the horse-shoes has been indulging in a golden jubilee. 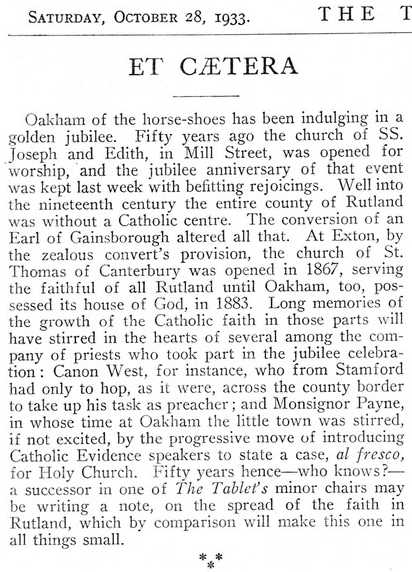 Oakham of the horse-shoes has been indulging in a golden jubilee. Fifty years ago the church of SS. Joseph and Edith, in Mill Street, was opened for worship, and the jubilee anniversary of that event was kept last week with befitting rejoicings. Well into the nineteenth century the entire county of Rutland was without a Catholic centre. The conversion of an Earl of Gainsborough altered all that. At Exton, by the zealous convert's provision, the church of St. Thomas of Canterbury was opened in 1867, serving the faithful of all Rutland until Oakham, too, possessed its house of God, in 1883. Long memories of the growth of the Catholic faith in those parts will have stirred in the hearts of several among the company of priests who took part in the jubilee celebration: Canon West, for instance, who from Stamford had only to hop, as it were, across the county border to take up his task as preacher ; and Monsignor Payne, in whose time at Oakham the little town was stirred, if not excited, by the progressive move of introducing Catholic Evidence speakers to state a case, al fresco, for Holy Church. Fifty years hence—who knows ?— a successor in one of The Tablet's minor chairs may be writing a note, on the spread of the faith in Rutland, which by comparison will make this one in all things small!