The foundation stone of a small Catholic church in Mill Street was laid by the Earl of Gainsborough in 1882 and his sister Lady Edith Noel provided a small endowment.  This church was described by Kelly’s Directory (Rutland) as : ‘The Roman Catholic church, in Mill Street, built in 1883, under the direction of Fr E Van Dale, served the Oakham mission and dedicated to SS. Joseph and Edith is a small and plain structure of brick with freestone facings and has a turret containing one bell’.  Read article in the Tablet 20th January 1883 - Mission in Oakham - 'Souls are Perishing' 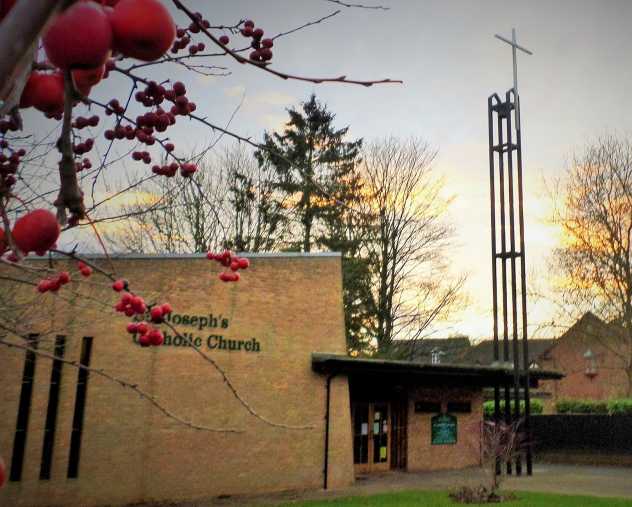 In 1975 an entirely new church was built on a new site in Station Road, with an integral hall and a presbytery. The site was secured for the parish by the fifth Earl of Gainsborough.

In 1979 the old church in Mill Street, which had been retained by the parish, was converted to serve as a parish centre, but is now in secular use.

The church is a simple rectangular structure, faced in buff-coloured brick, with a shallow monopitch roof across the whole building and a clerestorey strip on both long sides. The end wall facing the street has three simple vertical windows, with a glazed entrance to one side. The (liturgical) north wall facing the car park has four widely- spaced   segment-headed   windows   beneath   the   long   clerestorey.   Against   the (liturgical) south wall is the flat-roofed hall building and rising from its roof is an openwork metal bell tower. The presbytery is located behind the (liturgical) east end of the church making best use of the tapering site.

The interior is simply finished, with bare brick walls and exposed roof timbers.  The altar is set against the flat windowless east wall. A glazed partition runs the full length of the south wall, dividing the church from the hall.   The furnishings are all contemporary with the buildings and include Stations of the Cross designed and made by John Walton

St Thomas of Canterbury
Sunday:  9am Held at St Joseph's until end of February