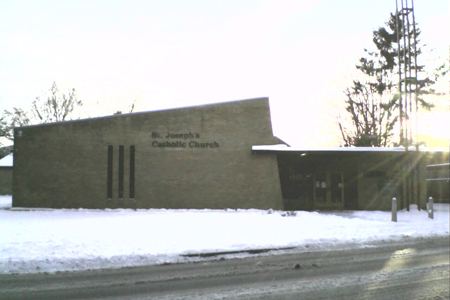 The building: A modern building that appears to date from the 1970s, with sloping roof and an interesting bell tower. The interior is pleasant, with a church hall added on.
The church: Part of the parish of Rutland, which includes the two market towns of Oakham and Uppingham and the many villages of the county. Among their activities are a group for retired people, and prayer groups that meet both at the church and in private homes.
The neighbourhood: Oakham is the largest town in the smallest county of England, Rutland. It's a busy town with some interesting attractions, including a railway museum. The reservoir called Rutland Water is England's (and Europe's) largest manmade lake in surface area; its construction in 1975 caused the town of Nether Hambleton and most of Middle Hambleton to be submerged. The church occupies a suburban situation, close to the classrooms of Oakham School.
The cast: The Revd Msgr Tom McGovern, parish priest, was the celebrant. He was assisted by the Revd Mr Raymond Keogh, deacon, an unnamed thurifer, crucifer and candle-bearers.
The date & time: Sunday, 22 November 2009, 10.30am.

What was the name of the service? Mass.

How full was the building? Mostly full – a wonderful surprise, and lots of children!

Did anyone welcome you personally? A sidesman at the door welcomed me. In their newsletter they list a welcomers' rota, so they evidently go to some effort.

How would you describe the pre-service atmosphere? Although it says in the leaflet. "Talk to God before mass," this did not happen. There were lots of young children, though, and so a certain amount of conversation was to be expected. People did pray while there was organ music.

What were the exact opening words of the service? "Welcome to mass."

What books did the congregation use during the service? Parish Mass Book and Liturgical Hymns Old and New. There were also two newsletters, one in colour and the other in black and white. A mass leaflet put out by the Redemptorist Press and a Jerusalem Bible topped off the packet.

What musical instruments were played? Organ. The priest said that he hoped to be able to form a music group in the future.

Did anything distract you? It seemed to be a busy mass – a lot of people at the altar and a lot going on.

Was the worship stiff-upper-lip, happy clappy, or what? Middle-of-the-road, except for the Gloria, which was decidedly happy-clappy.

Exactly how long was the sermon? 10 minutes.

On a scale of 1-10, how good was the preacher? 9 – Inspiring and refreshing. Down to earth and easy to relate to. He said many things that drew a laugh out of the congregation.

In a nutshell, what was the sermon about? Msgr McGovern spoke about the future of the church as a whole, especially the ways in which music helps worship and how important it is to get young people involved. The liturgy should be changed if doing so would help the church.

Which part of the service was like being in heaven? The incense, and so many people.

And which part was like being in... er... the other place? A child banging on the window – he looked very innocent!

What happened when you hung around after the service looking lost? There were lots of welcoming people, and we all shared the peace at the start, so I was familiar with some. Afterwards the church's Christmas fair took place, so everyone hurried off there. Some people sat and prayed. The lights were turned out very early though!

How would you describe the after-service coffee? Coffee was served at the Christmas fair, but I didn't go.

How would you feel about making this church your regular (where 10 = ecstatic, 0 = terminal)? 8 – A living and vibrant church.

Did the service make you feel glad to be a Christian? Yes.

What one thing will you remember about all this in seven days' time? A full church, and lots of smiles!